I tend to have gross feet. I’m on them 40 hours a week, when I’m off work I’ve been known to cram them into cute shoes in the name of style, and I run. Let’s face it, those puppies spend most of their time sorely neglected. Not to mention, I’m typically too cheap to spring for a pedicure.

Enter Mom. She desperately needed a pedicure, too, so she booked us appointments at a swanky place near her apartment. Considering my pedis consist of walking into whichever salon is advertising a special, this was awesome.

Apparently, Mom felt like spoiling the crap out of me. Seriously, I could not have asked for a better day.

We started the day with brunch at Another Broken Egg, which was absolutely fantastic.

I got the Stan’s #1 omelet with no ham. It was shrimp and crawfish, cheddar-jack cheese and mushrooms. And from the picture of my plate above, I clearly hated it.

After brunch, we had some time to kill so we shopped ‘til we dropped. Anne Taylor LOFT was having a 40% off everything sale. Yes, please! Mom and I hit it hard, and I walked out with essentially a new spring wardrobe. I even took a risk and got some colored jeans. You’ll see pics of the clothes soon. Prepare yourselves for lots and lots of shameless mirror shots showing off my new wardrobe.

After a couple more errands, including new throw pillows at Bed, Bath, and Beyond (pics to come once I hang the new curtains I got), we made it to the Posh Spot, a local spa. And boy, did they take care of my tootsies! I didn’t take a before picture because honestly, no one needs to see that. Let’s just say that there was a half-black toenail from the half marathon involved.

And the awesome staff at Posh turned that mess into this:

I’m still trying to figure out if my pedicurist is a good witch or a bad witch.

Now, I just need spring to you know, spring so that I can show these babies off in some sandals.

How often do you treat yourself to pedicures?

Mine used to be bacon, but it’s evolved into goat cheese and mushroom omelets.

Because I’m also in recovery from at eating disorder, I was a little hesitant to post my weight loss journey at the risk of sending a mixed message. However, since recovery is all about being proud of our accomplishments, I decided to go ahead and share. I’m especially proud of this weight loss, because I’ve slowly and steadily lost weight over almost a 2 year span. I’ve averaged a little over half a pound a week.

In January of 2011, I was at my heaviest weight ever, approximately 230 pounds. I don’t know the exact number, because I refused to step on a scale.

Keep in mind, I was still in the throes of restricting calories, then bingeing. That’s where ED got me. You know, besides destroying my self-worth, self-esteem, and health. Really fun stuff.

I began eating healthier and tracking my calories. Unfortunately, I quickly became obsessive about those calories. I still track, but only every so often, and usually if I’m starting to feel binge-tastic.

By summer, I had dropped 25 pounds, but I was still struggling with restrictive eating patterns, even though I was eating a “healthy” amount.

I plateaued here for a few months, until I was blessed enough to enter treatment for my disordered eating in January of 2012. As I began to learn how to treat my body better, I noticed that the weight started coming off without my fixating on every calorie in and every calorie out.

I mentioned in my running story that I began running as a means to my weight loss ends, but recovery is when I began running because it made me feel better. During this time, I dropped another 10 pounds without tracking calories, or jumping on the scale. The only reason I know my loss is because my dietician told me one day to show me that using food as fuel for healthy living was working.

I love this picture, because not only am I 35 pounds down in it, I look truly happy for the first time in a long time. I was taking a walk with one of my close friends, and we saw a playground and stopped to actually play. I would never have climbed something before…I would have been too afraid to fail because I felt my weight would hold me back. I felt free in this picture.

Since this picture, I have dropped another 10 pounds without focusing on it. Instead, I’ve continued to focus on fueling my body to help me get through an extremely active job and my workouts. I’ve found that by eating more than I ever believed I should, I’m finally getting the results I want.

Here I am just a couple days ago, down 45 pounds.

That’s an Olympic barbell that I’ve shed from my body. The average weight of an elephant’s heart. A 45 pound weight plate. That’s a lot of flippin’ weight!

But by doing it in a slow, steady, and finally healthy way, I’ve noticed changes besides my body shape. My hair, skin, and teeth look better. I have more energy in the day. I’m not burning up mental energy by obsessing over every ounce lost or gained. My happiness isn’t tied to the scale.

I still have a ways to go, but I don’t have a final number in mind. Somewhere in a healthy BMI range, a healthy body fat ratio, and the ability to feel confident in a bikini.

Today, I focus on victories that aren’t related to the scale, like running longer or faster, lifting heavier, trying a new food, or looking in the mirror and thinking “I look pretty today!”.

Those are the victories worth celebrating.

One of the things I’ve dealt with in recovery from ED is learning not to hide myself. I’ve never been the life of the party, or the outgoing, popular girl. I’ve always preferred to keep myself quiet and hidden.

For years, I’ve used not caring about how I look as a defense mechanism to keep you from noticing me. I’ve spent the last decade buried underneath sweatshirts, long hair and no makeup.

This was me before entering treatment for ED.

Hidden behind a wall of hair.

As I’ve gotten more comfortable with my body, I’ve started to shed the hair. The first step was to cut my hair from my waist to my armpits. Then, I got a little braver, and went just below my shoulders.

Still, I usually wore my hair up, or in a messy cascade to hide my face. I felt like if I didn’t try to look good, I had an excuse when I got rejected. Never mind that I wasn’t portraying any confidence; it was my hair’s fault!

Today, I decided no more. No more excuses. No more hiding.

I’ve been in love with the Katie Holmes bob since she got the cut way back when, but I’ve always been too scared to try a bob because I was convinced it would look heinous on me.

Well, today I let that fly out the window. 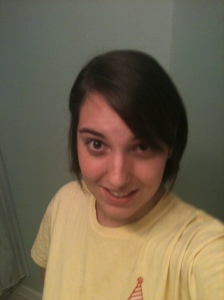 Oh, hey short hair! I went for it today. It’s not quite as short as the picture makes it seem, but it’s certainly chin length or slightly shorter.

On my way home from the salon, I almost cried. I had lost my security blanket. I can’t just throw my hair up in a ponytail or a bun. I have to actually make some effort. With a cut like this, I have to own it.

As I’ve looked in the mirror (and I’ve been doing a lot of that today), I’ve realized that I really like the cut. My sweet roommates have both boosted me up by telling me they love it.

It’s terrifying to go without my curtain of hair to hide behind. I’m used to it. It’s my comfort zone. But recovery is partially about breaking out of those comfort zones and challenging myself. Nine months ago, I would never have felt okay rocking a bob, but today, I feel pretty. I feel free. I feel like I’ve made a huge step in my recovery from ED.

And all this from a haircut.

What security blanket do you hide behind?

What is your comfort zone, and how can you break out of it?